When we showed Echo in the Riverfront we asked members of the audience to fill in a questionnaire. We tried to make sure this was anonymous and did not have any leading questions. 63 people completed the questionnaire, and the results are shown here as a word cloud. 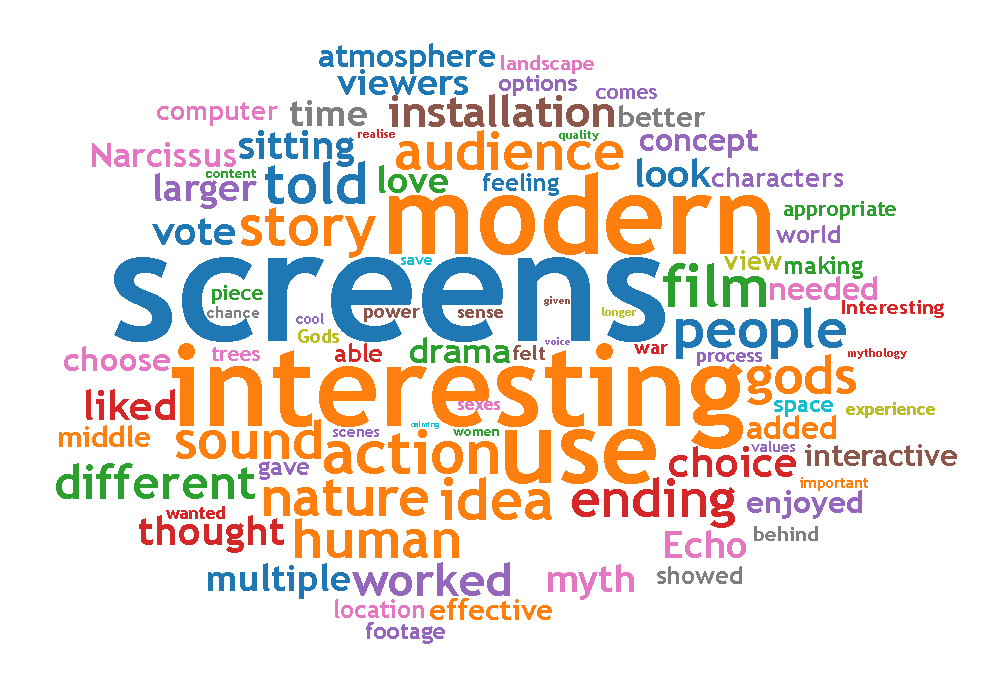 1.  Did you enjoy the installation?  (Please circle the number that corresponds most closely to your response.)

* One person gave a score of 4.5 so I’ve distributed this between 4 and 5 above.

The average score was 4.3, which is a pretty good satisfaction ratio.  There seemed to be no correlation between liking and age, gender, ethnicity or religious belief but this is a small sample.  Of the 3 which didn’t much like the piece, two were female and one man, and one woman was in her sixties, but the other two were under 25.

Obviously slightly less people wanted to watch this again, but compared perhaps with a normal film this is a high rate of wanting to revisit.  This is supported by some of the comments saying they wanted to see the other endings, or choose different screens to look at.  Average score 4.01

3.  Please describe one or two things that you liked most about the installation.

A qualitative question, which you can see in the general word cloud.  However, I took the responses and tried to turn them into simple word choices.  Out of this I found that the order of preference was as follows:-

4.  Please describe one or two things that you disliked most about the installation?

The major negative comments are around the visibility of the screens – difficult because people were blocking other people’s sight, and perhaps even the olive trees got in the way(5).  One person, a fine artist, used to installations, suggested keeping the olive trees in one bunch in order to avoid visibility problems.  The rear screen came up for some criticism, with 6 people disliking them, but since some people loved this in answer 3, there’s some inconsistency.  However, this has made me realise that the visual and sound cues to look at the rear screen were not clear enough, and as one person noticed, the timing between the screens wasn’t always spot on.  However, again, question 3 prompted pleasure from people about the interactions between the screens, showing how hard this is to accomplish well. Other people (6) criticised various technical shortcomings and budgetary shortcomings from poor export quality of one screen, to different hues on the screens to acting. These criticisms came mostly from film students who are informed on the issues.  Two people didn’t think the story was clear enough, but one person thought it was too clear and wanted less explicit thematisation.  I recognise this as a potential criticism of the amount of narration and speech which I wrote into the script as a way of overdetermining the meaning and making sure people weren’t disorientated narratively even if they were confused spatially.

6.  Please describe in a few words what this installation is about.

Most people answered this very easily with clear themes emerging which were the ones intended.  People answered with a content or theme related answer such as “battle of the sexes, stupidity of human nature”, “the story of the Gods’ fighting affecting human nature”, “human nature and choice”, juxtaposing the modern world situation with the fictional drama of individuals be it the Gods or simple human beings” etc., but some people took a formalist approach, “multiple screens, experimental filmmaking”, “experiments with visual storytelling methods”.

Less fully completed, this rather showed that the young people in particular, weren’t aware of the myth.  A couple of people noted that they didn’t know about the Hera/Zeus connection.  Of those that answered, 3 said that the version added 3D perspective to the myth, and one wasn’t quite sure of the relevance of the myth to the story.

7. Please describe the process of choosing the endings. What did you think of this process?

Most people liked the opportunity to do this.  There was a marked contrast between the younger people who expected interactivity and some of the older people who didn’t know what to do with the choice.  The choice was a reason some people would revisit the exhibition to get another ending.  Some helpful suggestions were made about making voting clearer using a spotlight and also changing the wording of the options.  There were a few comments which were very interesting about the character of the other people in the installation and their choices.  The audience were able to make moral judgements about other audience members – whether the spectators were cynical (chose for Echo and Narcissus to die) or conventional (chose happy ending).

8.  Approximately how many people watched at the same time?

This was also useful, because there were various showings and under three people felt a bit empty, but anything up from 6 people worked well.  At about 15 people, there was blocking of the screen, but some people really loved the participation of the larger audience.

9.  How well did you think the screens were arranged?

Here again, some differences between people who really liked the rear screen and those who weren’t aware of it early enough.  One spectator really liked the rear screen because she felt that the blind character Tiresias, was creepy and watching all the audience, an effect which was very much intended.  The directionality of the 3 frontalish screens was occasionally criticised by some people, as they wanted even more immersion and for the screens to be at 90% as the original plan.  This was not possible with the space at the Riverfront, but I’m not sure it would work anyway, because peripheral vision could not then operate and I believe this is part of the pleasure.

19.  What did you think of the set and location used in the installation?

An appreciation of the directionality and immersiveness of the sound is very apparent from the results, but sometimes the sound was not sufficiently localised to help direct viewers to particular screens (probably the rear screen)

Most people had not seen other installation dramas, or particularly this kind. Many thought it very exciting.

13.  Generally, what do you think of the idea of mixing drama, visual art, film and theatre?

Below is a word cloud comprising the answers to question 12 and 13, where there is clear enthusiasm for more installations. 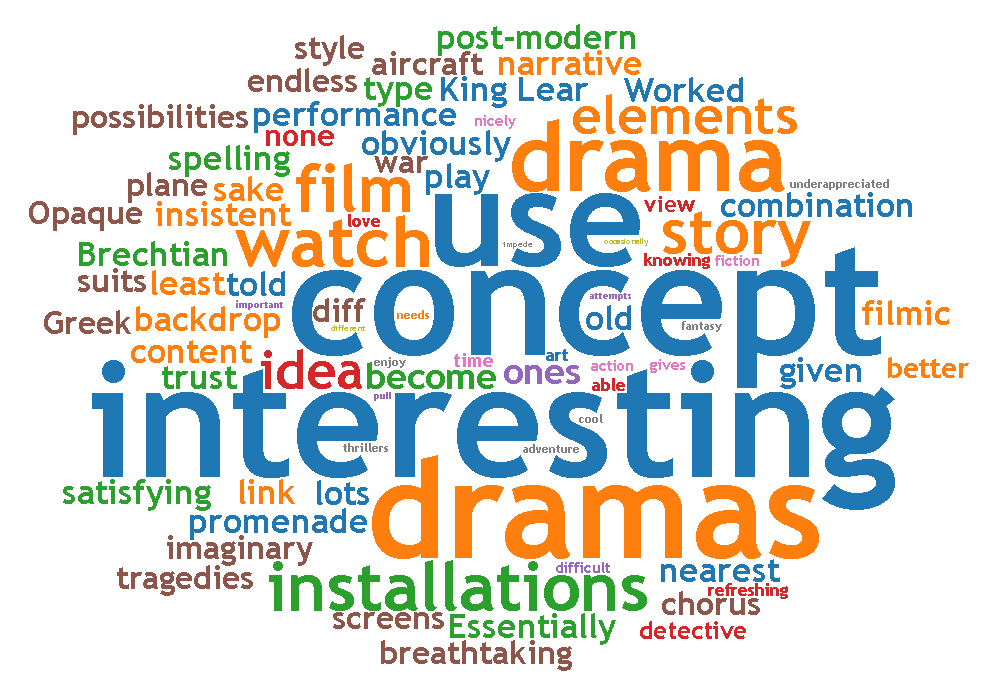 Here’s a grid showing all the questionnaire response forms. The rows represent respondents, and the columns questions: Analysis of Questionnaire