There were two distinct rehearsal phases. The first one was just Lynn Hunter, Brendan Charleson and myself.  Lynn and Brendan have vast experience in TIE (Theatre in Education) and also in dramaturgy workshops, both outside and within the university. For the past 7 years they have been visiting lecturers on the Directing Option which I run with second year undergraduates, teaching directing actors.   I asked them along in order to have a dramaturgy session, to test the script and to make sure it was both coherent and useful.

A few months later and just before the shoot in June, we had a thorough rehearsal with all the actors.  The aim of this was partly to realise performance, but also to test how to shoot the multiple screens and how to give the actors an idea of what they were trying to do.  In order to do this, we made up the fictional space by having chairs representing the screens at ground level (the nymphs front left, middle and right) and Tyresias (rear) and the ladder representing the Gods (top screen), as here: 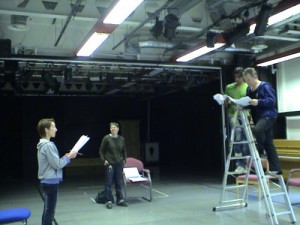 We then ran all the action so that everyone knew how it was going to work in principle (including camera, sound and editing).  We also calculated  eyelines from Gods to Nymphs and to Tiresias.  Issues of timing were more difficult to work out.  Since all the screens were shot at different times, sequences such as the chase needed to be matched to Hera and Zeus watching.  We realised this would have to be a bit flexible, and therefore thought up the idea of the landscape shots