When we edited Echo we designed the cruciform screen display with five different pictures displayed which eventually became the simulation you see here.  This was accompanied by a mono soundtrack with 5 audio tracks laid down to represent the 5 screens.  We realised very soon that this was an unsatisfactory way of displaying the installation. However, you can see from the Riverfront Trailer and the still below that the flat screen simply is not immersive – it does kind of represent a way that montage works in the piece, but the audience is removed, in front of the action, not in the middle of it, as the installation intends.  In addition, the pictures are very small in order to fit on a single screen, and the eyelines of the characters are actually wrong.  Tiresias is supposed to be behind the audience talking up to Hera and Zeus, not at the bottom of the same screen. 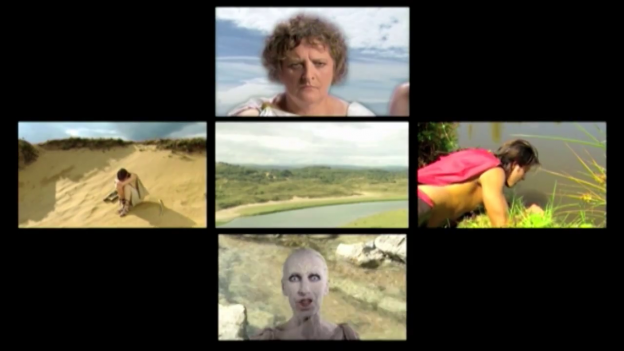 The difference in eyeline match is apparent when Tiresias looks up left to find Hera (pictured) or up right to Zeus.  This crosses the 180% line of action when represented on a flat plane but works as intended in a space where the screens are displayed as intended (see walkthough in installation page).

When we had finished editing Echo, we then used this cruciform representation on our master control computer here.  It was loaded with burnt in timecode and worked in parallel with the other computers so that we could accurately control the timecode.

We are now working on a way to use rich media content to display a properly interactive web based version of the show, where viewers can choose to zoom in on any of the screens, choose the ending, or even see the screens displayed spatially as they were in the installation.